I just returned from the Oakland book fair. I think the venue and the surrounding area, downtown Oakland, surprised a lot of people, in a very good way. BART station directly across the street. Nice hotel (normal rate of $139 per) good food. I shipped my load and flew down. 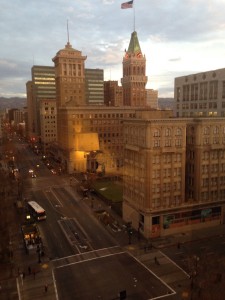 There seemed to be some communication issues between the hotel and the fair promoter regarding incoming shipping. One of our PNW members, though he shipped all of his trunks in plenty of time, showed up for setup only to find his trunks were nowhere to be found. After 3 hours of searching, and 3 hours of lost setup time, the trunks were located across the street in the hotel’s holding area. The same PNW member was expecting another box of books to arrive in time for opening night. Despite about a dozen calls over a couple of days, he was told the box did not arrive, finally, late Friday, armed with the tracking number and who signed for the box, the box was discovered across the street in the hotel’s holding area and had arrived a couple of days earlier.
Attendance was outstanding despite the heavy rain on Friday and Sunday. Pre-fair sales were good for me, and many others I spoke to. Some had “their best fair ever” and, no doubt some did not.

However, over all, it was a very positive experience, made even better when Susan and Janine (looking sharp) arrived from HQ, and Luke and Alan from Bibliopolis. The new ABAA Directory was on hand (black) and I supplied some of our, just off the press, PNW directories to members who were exhibiting. If you did not exhibit I already mailed copies to chapter members. (if you need more just let me know). 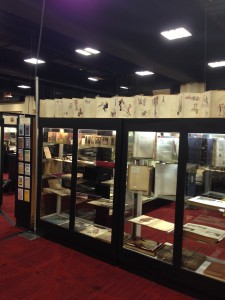 There were some nice visuals in nearly every booth

Security was very good in my humble opinion and Mr Bustamante and his crew did an excellent job with all the glass cases (he had 6 semi trucks at the site).
Everyone was worried about how long it would take for empty trunks to arrive after the show ended, but the venue has storage on both ends of the hall so it was very quick. I walked out of the fair at 7pm packed and with all shipping paperwork completed (the fair ended at 5pm on Sunday).
White Rain, the promoter, did an EXCELLENT job all around, and it was a real pleasure seeing Lynn Winslow making sure all was well.

The lighting throughout the hall was exceptionally bright and made a big difference, and, of course, even during the heaviest of rain, no leaks. 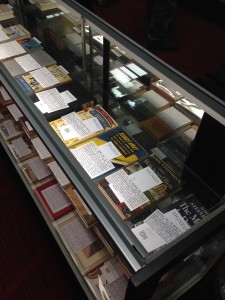 Plenty of nice books were available, as well as maps and prints

The union rules applied as far as tail gate service, and there was a glitch reported at the end of the fair for those trying to load and drive home. But, for a first time venue, most thought it was a big improvement over the Concourse. And, frankly, the market across the street, and all the restaurants were more reasonable than those in SF, and, what with less traffic and noise and hassle, it was a wonderful experience (and nobody had to ‘wait for the bus’ or a cab.
I did not attend the PBA auction that was held Sunday morning on the second floor at 8am but I am sure many did and close to 10k was raised for our Benevolent Fund.

The hotel staff was very responsive and the restaurant staff could not have been better, very positive all around. The Oakland airport is also smaller with less hassle and not far away. My ticket was $69 each way. Thanks to all that made this book fair weekend fun and positive, and special thanks to the Northern California Book Fair Committee that was tasked with finding a suitable venue. –Ed Smith

Still buying at the end